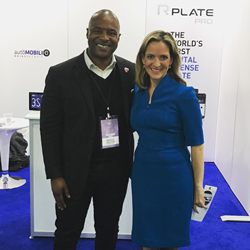 The Michigan legislature has passed a bill (Public Act 656 of 2018) enabling digital license plate technology in the state of Michigan. This new technology, which has the potential to generate efficiencies and benefits for consumers, businesses, and the state, offers a digital alternative to today’s 125-year-old stamped metal license. Reviver Auto, the creator of the Rplate, the world’s first and only digital license plate, will work in conjunction with newly-elected Secretary of State Jocelyn Benson, to roll the plates out to interested users in the state of Michigan.

“We are proud to have worked closely with the department of state and Secretary Benson, as well as the Michigan legislature and other public officials, to pass this pioneering bill in the state that invented the automotive industry,” said Reviver Auto Co-founder and CEO Neville Boston. “We look forward to continuing our great working relationship with the state of Michigan, to not only contribute to a more connected community and bring significant benefits to its citizens and businesses, but to also help fuel the innovation fire right here in the core of the global automotive industry.”

The Rplate, which launched on the roads in California in June 2018, transforms today’s stamped metal license plate into a sleek, digital, high-definition display and offers a platform to simplify daily life with vast potential for future innovation. The Rplate’s connected car platform can automate vehicle renewals, replacing legacy stickers with digital decals, and add new levels of personalization to the license plate, including promoting charitable causes, passion for a sports team, or even a child’s academic/athletic achievements. The Rplate also enables stolen vehicle and plate detached information, as well as geo-fencing capabilities for business and/or governmental entities. Future features include Amber and weather alerts, automated parking, trips taken, vehicle miles traveled, marketing capabilities and much more.

Michigan, the home of the automotive industry and the heart of its technology innovations, is the first state in the nation to enact a law to allow implementation of digital license plates, helping to open up a digital gateway to a world of innovation opportunities – from Smart Cities initiatives to autonomous vehicle technology – while also offering new efficiencies for consumers such as simplifying and expediting the process for renewing automobile registration.

The legislation coincides with the upgrading of internal systems at Michigan’s Department of State which will provide effortless integration with the Rplate technology. Reviver Auto and the Secretary of State’s office are eager to partner with Michigan companies and organizations to bring the digital license plates to all interested individuals.

Reviver Auto is also partnering with Michigan-based The Pink Fund to create a Pink Fund-branded digital license plate, as well as digital Pink Fund logos for the Rplate, all of which will help raise funds to support the organization’s mission of providing financial support to help meet basic needs, decrease stress levels and allow breast cancer patients in active treatment to focus on healing while improving survivorship outcomes.

In addition to Michigan, the Rplate, which is currently on the road in California, is anticipated to expand into new states in 2019: the use of digital license plates is fully authorized for Arizona; legislation has been passed in Texas and Florida, and Washington State will conduct a digital license plate study. In addition, Reviver Auto has begun its international growth with an initial program in Dubai, UAE for a proof of concept in partnership with the Dubai Roads and Transport Authority. The Rplate is available in California through participating auto dealerships, proshops such as Al & Ed’s Autosound, and for preorder at the Reviver Auto website http://www.reviverauto.com.

The Rplate is being demonstrated at Booth CC05 at the Automobil-D event (which precedes the Detroit Auto Show) January 14-17.

About Reviver Auto
Reviver Auto’s mission is to bring new and far-reaching efficiencies, revolutionary marketing, and unprecedented connectivity to the auto industry through disruptive technology. With its Rplate™, the company has completely reinvented the 125-year-old stamped metal license plate into a connected car platform that digitizes and will soon automate the costly, often frustrating, and time-consuming DMV renewal process. Approved in California by the DMV and CHP under pilot, the Rplate also provides telematics functionality and brings a new level of personalization to the license plate. For more information, visit http://www.reviverauto.com.